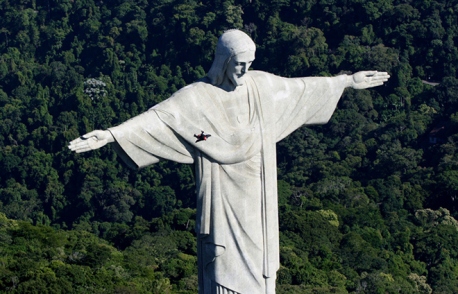 See the original publication of this article at Junkee.

Until recently, the Omega Transmitter stood in the far corner of southeast Australia as the highest manmade structure in the Southern Hemisphere. Installed in 1978, the 427-metre object enjoyed a long history with the Department of Defence as part of a global communications system and naval transmitting station. After being decommissioned in 2008, it was demolished two months ago.

But that official history makes no mention of its most interesting aspect: it was an incredible place to BASE jump.

An acronym for building, antenna, span (bridge) and earth, BASE jumping is mostly illegal in Australia, but the sport continues to thrive as parachute-fitted adrenaline junkies find new objects to leap from. At a “safe” height and situated in a wide, isolated paddock, the Omega Transmitter was something of an icon.

“This object would be a perfect jump, for both beginners and advanced BASE jumpers, to hone their skills in a safe and controlled manner,” renowned Australian jumper Chris “Douggs” McDougall said, before the tower’s demolition. “Yet if jumpers get caught there, they can be heavily charged by the authorities and even get some jail time. It’s a real shame. The highest jump that we have will be lost forever.”

Importantly, the demolition announcement may not have solely been the outcome of bureaucratic process. In January last year, 23-year-old Hunter Valley BASE jumper Ash Cosgriff fell to his death from the structure when his parachute malfunctioned. The event received a lot of media attention as his accompanying jumper was charged with failing to immediately report the accident after initially fleeing the scene. Some have speculated the incident prompted the tower’s destruction.

Whenever a BASE death attracts the public’s eye such as this, the subsequent assessments are often damning. The death is branded avoidable, the sport reckless, and its participants selfish. But Douggs and other figures in the sport are increasingly questioning its longstanding illegality in Australia — could it be contributing to these deaths rather than preventing them?

“We Always Have To Do Things In A Rush”

Queensland is the only state that carries a law directly aimed at BASE jumpers, where the use of buildings and structures for parachute jumps is prohibited. Other offences across the nation are commonly labelled trespassing, public nuisance and threats to public safety. And, for many, a change in these laws could potentially mean the difference between life and death.

Under the constant threat of legal consequence, many undertake jumps at night, when the chances of persecution are much lower, but the risk of an accident or ‘going in’ (the term used to describe a BASE death) is higher. A lot can go awry in a plunge, but the need to envision an escape route is an additional mental tax in a sport where the confrontation of fear is everything.

“Making objects illegal like they are now does not stop any BASE jumpers from pursuing their chosen sport,” Douggs says. “It just drives them underground and actually makes it a lot more dangerous.”

Douggs lives in Wengen, a tiny village situated between the towering cliffs of Switzerland’s majestic Lauterbrunnen Valley where his sport is legal. Tourists regularly pass through the town as they’re shuffled back and forth between the valley and the Jungfrau peak and it’s here that Douggs teaches BASE-jumping courses. He also experiments with wingsuiting, when jumpers use a special device to add surface area to their bodies and attempt to glide like birds. The next level is proximity flying, where jumpers exploit the suit’s agility and fly as close to the ground as possible.

Candid but disarming, the former BASE world champion is well-known for his technical precision, attention to safety, and wild past. Answering questions over email while on an airport layover — a setting as common to the 39-year-old as a lounge room is for the rest of us — he reflects on the sport’s demonisation in Australia.

“Back when I started, jumping was frowned upon in a lot of places around the world, and was still a bit of a secret society,” he says. “It was definitely fun sneaking around on power towers and buildings, but it was very stressful as well — we always had to do things in a rush. I much prefer to do casual legal buildings these days.”

He also explains that the lack of support for BASE down under has prompted an exodus of its professionals, himself included.

“Australian jumpers are forced overseas not only to learn the basics, but to become advanced jumpers and wingsuit pilots. It’s very hard to train for competitions in Australia, which has forced me to move to Europe where I can train safely as an athlete, rather than having to sneak around and run from the law all the time.”

In fact, in 2007, Douggs ended up in court after he and friend Dan Aldridge jumped from the Q1 building on the Gold Coast. Despite scrambling into a waiting van and fleeing shortly after they landed, both men received $750 fines, and a great deal of media attention.

Queensland barrister and champion skydiver, Andrew “Sarge” Preston, represented the pair in court. He agrees that Australia’s approach to the sport lags behind the rest of the world, but points out the staggering complexities involved in modifying the law.

“Someone driving at peak hour may see someone leap from a bridge,” he says. “They may see it as a BASE jump, or perhaps a suicide — either way, they are distracted, and have an accident. Suppose that accident causes the death of a pedestrian or an unborn child in another car? All of that is not too far-fetched as far as the law is concerned.”

The Comparable Dangers Of BASE

The majority of BASE jumpers are not full-time adventurers with life philosophies embedded in Instagram memes. The quiet undercurrent of the sport is a stream of professionals, including white-collar workers, who take it up as a casual hobby.

“They have the same quotidian concerns as everyone else,” Matt Higgins, a New York Times journalist who recently spent five years following jumpers around the world for a new book, says over email. “They get upset when they misplace their car keys. They have parents and siblings, and sometimes wives and husbands and children. They have jobs and obligations and bills to pay. Very little of their actual time is spent jumping.”

“Although they like to have fun, for the most part, BASE jumpers are very serious when it comes to preparing and making jumps. Jumpers who get hurt or die are usually [found] to have screwed up,” he says.

Mick Hill is a skydiving instructor in Wollongong on the NSW south coast. After amassing 30 years of experience, Mick began BASE-jumping three years ago and has logged over 400 plunges since. Despite this, he’s cautious about discussing it, given the stigma and legal ramifications.

“I love the peace and quiet of BASE jumping — [it] creates an amazing headspace,” he says. “[But] I usually don’t mention it because it’s a very misunderstood sport … I understand trespass issues with buildings, antennas, and bridges. But our national parks should be open for all users — we are just another sport with social benefits, like fitness and discipline.”

Both he and Douggs are hesitant to identify specific Australian jumping spots, “for fear of persecution” in the latter’s words. But even if the legal debate concentrated on only national parks, the dilemma would remain complicated at best.

“Danger invites rescue,” Sarge says. BASE mishaps often require the attention of publicly-funded emergency services, but he makes a point to note it’s not in any greater number than some other sports. “The concern is understandable, but the government regulate motorcycling, ultra-light aircraft flying, boating, canoeing, rock fishing, boxing, scuba-diving, bungee-jumping and a host of other sports that result in deaths each year,” he says.

As virtually the only exception in Australia, BASE is permitted in Western Australia’s national parks. But last year, a video showing two jumpers plunging from Bluff Knoll in the state’s south did the rounds, prompting a public discussion over whether it should be banned and aligned with the majority of the country. WA parks and wildlife refused to change their policy, although director of park and visitor services Peter Sharp told the ABC the sport was inherently risky.

Remarkably, this is a conversation relatively unique to BASE. When fatalities occur in comparatively benign sports, the subsequent public discussion seems to instead focus on better risk mitigation. Last year, teenage jockey Caitlin Forrest died in hospital after a fall at Murray Bridge in South Australia. A day earlier, jockey Carly-Mae Pye had her life support switched off after a jump accident at Queensland’s Callaghan Park. No one was looking to outlaw horse racing.

Perhaps contributing to this, is the view that BASE jumpers are inherently selfish or reckless; one that seems ignorant of the years of expensive training that most undertake. They require extreme mental aptitude just to avoid catastrophic injury or death. For this reason, among others, jumpers uniformly scoff at the accusation they unconsciously act out suicidal impulses.

“That’s just ridiculous,” Douggs says. “If I wanted to die, I can guarantee you I would be dead already. We don’t jump because we want to die — we jump because we really want to live!”

BASE antihero and one of the sport’s more well-known athletes, Californian Jeb Corliss expresses the same exasperation with all this. “If I had a death wish — I’d be dead. Think about it! If I wanted to die, do you think I would survive after doing all these incredibly dangerous things?” he told Channel 7’s Sunday Night in 2012. Months before, an accident had almost ended his life when he struck terrain in South Africa while proximity flying at around 200km/hour.

Speaking from the US, Jeb rejects the idea the sport remains an interrogated pursuit, because in a global context, it isn’t. “I have BASE-jumped in over 40 countries, and 95 percent of my jumps have been legal,” he says. “Most countries love BASE jumping and welcome us with open arms. In the last ten years, I have done nothing but 100 percent legal BASE jumping all around the world.”

The 39-year-old represents another dimension of the sport so far unimagined in Australia. Jeb’s sponsors include GoPro, Pelican and Apex Base, alongside other companies who want to tap into his undeniable marketing currency. Few sports can supply crowds with the instant gratification of spectacle that a BASE jump achieves — especially when it’s given a platform for exhibition.

Austrian company Red Bull has taken advantage of the rise of BASE as a professional venture, through aligning their energy drink with extreme sports. The company currently lists eleven sponsored BASE jumpers on their website.

One of them, Felix Baumgartner, performed probably the most famous jump in history when he leapt from the “edge of space” in October 2012. Baumgartner flew to the stratosphere in a helium balloon and plunged from a capsule around 39km above New Mexico. The stunt elicited dizzying excitement and generated global chatter about the capacities of humankind.

But all this seems hard to comprehend, when compared to a comparatively banal BASE jump in an Australian national park. One is fetishised as a human accomplishment akin to the moon landing, and the other is dismissed as the behaviour of miscreants.

If the legal cobwebs are navigated in Australia, the potential exists for a global professional sport to be enshrined into our iconic outdoorsy culture. But more importantly, the prospect exists to minimise risk factors that occasionally spell death in an activity that continues undeterred, despite existing laws. As Sarge puts it, regulation should become the focus, not prohibition.

“I could see it happening. But it would take time,” he says. “Fundamentally, it’s about reasoned approaches. Many laws get changed that way.”

australian journalist living in canada. View all posts by croberto